None of us want to admit it, but we’ve all been there. Even your own humble Chop has, on a certain few occasions chundered mightily in the most inappropriate of places (mostly when some asshole friend insists on buying rounds of Jagermeister). We know better now, and thanks to our ironclad moral code and vast knowledge of social etiquette, we are proud to report that we can still show our face in most of Baltimore’s finest dive bars.

Of course, there is only one right and proper place to retch, and that’s in the privacy of your own home in your own miserable commode that you really meant to scrub out really well this week and now really wish you had.

Failing that, the best you can hope for is the side of a road far from the bar(s) where you spent your evening. You’d better also hope for a compassionate and understanding designated driver. While the shoulder of a highway is possibly the best place to puke publicly, the inside of someone else’s car is possibly the worst. And God help you if you ever get retarded enough to sick up in a cab. Not even the Chop can help you out of that one.

At any rate, you should at least be able to get yourself out of the bar. Once you’re outside though, you’re not in the clear just yet. A good rule of thumb is to avoid vomiting in any place where you’d think twice about peeing in broad daylight. Behind a dumpster is cool, a parking meter on Aliceanna Street is not. Behind a tall bush is acceptable, a bus stop on North Avenue is not. 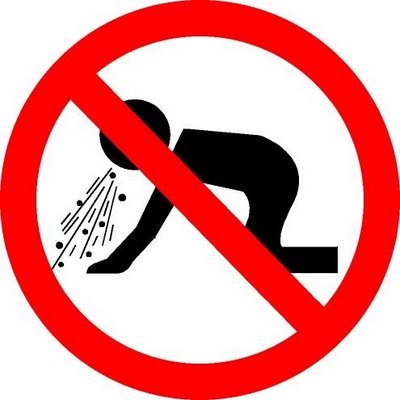 But supposing, just supposing that you’ve imbibed so well that you can’t possibly effect egress in a timely fashion. All hope is not lost.

Listen closely Baltimore: You must make it to the toilets. Run if you have to. Scream as loud as you can if that’s what it takes. Don’t worry- when people realize what you’re about they will get out of your way, even if they have to stop mid-stream to do it. Don’t worry about making a scene, because you’re making a scene anyway.

But here’s the most important thing… whether you make it to the lavatory or whether you ‘stand and deliver’ right in the middle of a crowded tavern, you’re on the hook… and certain things are expected of you.

You have to own up to it. This is best done by approaching the nearest bartender and making a sincerely contrite apology. Apologize profusely. To everyone in sight. The Bartender-Customer relationship is an ancient and sacred trust. Your doctor can’t treat you if you’re not forthcoming. Your priest can’t absolve you if you don’t confess, and your bartender can’t help you if you try to weasel out. Bartenders are professionals, and have seen much worse than you in their day. Never approach a barback, waiter, or other staffer. You are the province of the bartender, and he is your point-man in this situation.

Get your check. It doesn’t matter if you’re drinking alone or a party of twelve. You’re not going to be served anymore, so you might as well leave. Hastily.

Play the victim. You know that routine you break out when you’re calling in sick to work on a Monday? Don’t be afraid to break that out at the bar after you’ve tossed it all. Don’t look at it as ‘this horribly embarrassing thing that I did.‘ Instead look at it as ‘this terrible thing that happened to me.’ Preserve your dignity at all costs.

Tip Lavishly. We really can’t stress this enough. If you’re nauseated in a bar, you need to tip ridiculously well. If your tab is double digits, a 100% tip is in order. If you’re in the triple digits, 50% is your starting point. These are minimum standards. There is no ceiling in this situation.

Get the hell out of Dodge. Don’t try to say goodbye to that college classmate you bumped into. Don’t wait for everyone else to finish their drinks… just GO. Drunken hookup rules apply here. Gather your things and GTFO. If there’s unsettled business or a guilty conscience, you can stop by 3-4 days later during happy hour to discuss things in the light of day.

Don’t do it again! Impeccable behavior is expected from this point on. If you show up the next Friday and perform an encore, you’re sunk. When you heave in a bar, you had better be a perfect gentleman or a proper lady from that point onward.

Note: The Chop does not endorse or condone the buying or drinking of Jagermeister. If we see you do it in public, we will walk the other way. Fast.