The Chop is not typically given over to gambling. We used to frequent Pimlico when the horses were running, and we’re loathe to back out of a bar bet if we’re absolutely sure that it was Paul Rodriguez who co-starred in DC Cab and not George Lopez. Aside from that though, we tend to eschew games of chance believing the odds are always in favor of the house.

So it may be a bit uncharacteristic of us to come out and endorse credit card roulette, but endorse it we do, and heartily. 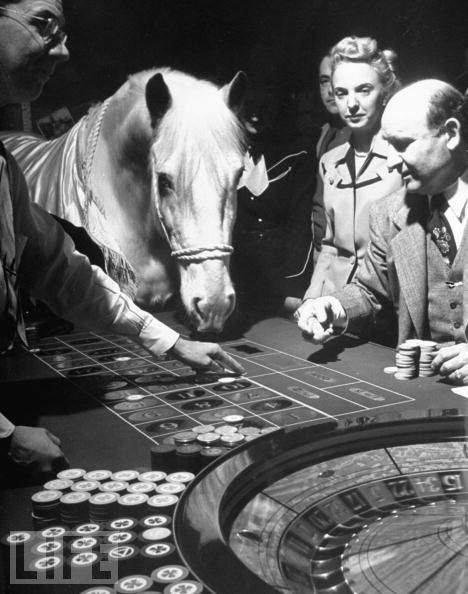 CCR is great for fancy restaurants. Just make sure you don't eat like a horse...

For the uninitiated, credit card roulette is a game played by a group of friends out dining or drinking. When the bill comes, all parties at the table produce a credit card, which cards are then shuffled and one is picked at random, usually by a waiter or busboy. The owner of the card picked is then gracious enough to pick up the entire check, while everyone else’s card finds its way back into their wallets unswiped.

Credit card roulette is not new, per se, as the earliest reference to it we found in a quick Google search was 2006. It is however new enough that it has yet to gain much in the way of popularity. Despite a few mentions here and there on TV and in the movies and print media, many people have still never heard of it, and those who do know about it often balk. With the great recession taking hold in mid-2007, most people out there were lucky to be eating at all, let alone in restaurants, and that’s to say nothing of picking up the whole table’s bill. We’re slowly crawling out of that mire though, and we hope that 2011 will be the year that CCR really takes off as a social phenomenon.

Granted, it’s not for everyone. For those who go out often enough though, and who tend to go out with the same groups of friends on a regular basis, the rewards easily outweigh the risks. Hell, we endorse paying the bill out of sheer generosity if you can swing it. The reaction to a surprise check pick-up can range anywhere from genuine gratitude to outright awe. If you’ve never felt this from your guests (and at this point they are your guests), you owe it to yourself at least once. Even as a winner (loser) of credit card roulette though, a hearty round of thanks and appreciation are still your due.

Another great aspect of this game though, and the main reason we endorse it with so much gusto is because of the social bonds it can create and nurture. If nothing else, it’s an inducement for the loser to invite everyone else back out for another meal in the hopes of getting back to breaking even. After a few meals are exchanged and it all evens out (and maybe a few new marks get to pay once in a while) the whole thing becomes more of a gentlemen’s society and rotating supper club than anything else. And hey, who doesn’t like a free meal once in a while.

What about you? Have you played credit card roulette before? Won? Lost? Was the loser a sport or did they get all huffy about it. would you try it again? Let us know in the comments.