Maybe you’re the type that doesn’t dress up a lot. Perhaps you’re a lot more comfortable in a pair of Adidas or Converse than brogues or boots. Style is a matter of taste and lifestyle, and at the end of the day it’s to each his own.

Tomorrow is Easter Sunday, and for a lot of you it will represent one of the two or three times you’ll see the inside of a church this year. Or you may just be getting together with family. Or your girlfriend’s family. For most people, whatever they’re doing, Easter is a prime day for wearing the best pair of shoes you own.

Now go home and get your fucking shinebox.

There’s no substitute for a proper shoeshine, but if you’re the sort who usually takes to shoes that don’t need polishing and has only one pair of dress shoes buried way back in the bottom of the closet and reserved for weddings and funerals, you may be caught out tomorrow.

Tomorrow morning when you wake up all hungover and reluctant and pull out your sad sack of a suit and try to remember how to tie a four in hand, you may then notice that your dress shoes have a nice patina of dust, cigarette ashes and beer foam stains, and you’ve got to be out the door in 10 minutes because you hit that snooze button too hard. Even if you had the time to give your shoes a proper shine, you don’t have brushes, cloth or polish, because after all, who the hell keeps that on hand all the time?

Fear not, slovenly friend. The Chop has you covered.

That’s it. That’s all there is to it. Your shoes aren’t going to pass Marine Corps muster, but they’re going to look a sight better than they did 10 seconds ago, and probably even be presentable. Furniture polish is all wax based, as is shoe polish, so there’s no need to worry about harming your shoes. If they’re in a very sorry state with quite a bit of dust and dirt present, you’d also do well to wipe them down first with one end of a slightly damp cloth or towel and dry them with the other side.

It may not be ideal, but it’s a hell of a lot cheaper and more sensible way to clean your shoes than wasting perfectly good Champagne on them.

It recently occurred to us than since we now own a laptop, we’re going to be in need of a bag in which to carry it if we want to take it with us next time we go a-traveling. After all, the TSA is good for more than just groping your grandma and stealing your souvenirs… they also excel at breaking electronics.

We didn’t want to end up with something that looks more like a big, ridiculous piece of luggage, and we’re not too keen on briefcases either, since no one is mistaking us for a businessman anytime soon. So a messenger bag makes for a natural choice.

Besides, we’re also seriously considering buying a bicycle when we come back in May, so a decent messenger bag may end up serving double duty by toting a computer, as well as keeping hands free on a bike. With that in mind, and since we’ve already gone on record as saying fuck leather, we’re probably going to end up with one of the following options. Fendi and Ferragamo they ain’t, but they’re all solid choices for getting around Charm City.

We like this Ben Sherman bag, but probably not enough to buy it. We’re mostly including it here because we like the brand and it’s a solid choice for anyone on a tighter budget. It’s probably not worth its price tag, but is likely better than anything else you’ll find at that price. On the plus side it’s well designed and neutral, appearing both modern and classic at once. The downside is that you’re looking at cheaper construction and material than is ideal. The lower grade cotton canvas may fray or open up, and we’d bet the faux-leather lining won’t last long at all. $89.

A lot of people give Fossil no love, deriding their stuff as cheap, trendy, what-have-you. We’ll grant you that the watches and clothing leave a lot to be desired, but compare this bag to the Ben Sherman above and you’ll see immediately what an extra $79 buys you.

The leather here is genuine, and covers the whole bottom of the bag. The strap is made of the same canvas as the body, as opposed to woven nylon. The closure is mechanical, and not the magnets found on the Sherman or the velcro on even cheaper bags. The interior comes with a dedicated laptop pocket (which is the whole point of this post, eh?) as well as standard zip and slip pockets and is lined with canvas. The Sherman bag has ‘multi-function’ pockets and is lined with…??? Again, maybe not Louis Vuitton caliber, but a very solid bag for the money. $168. 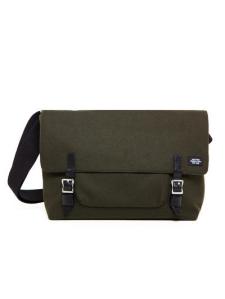 Update: The website is now showing this bag as ‘unavailable’

Wool marks a big step up from canvas, and this 80% wool blend, leather lined number from Jack Spade is (ahem) almost worth its ridiculously high price tag. Lucky for us, it’s been marked down significantly, and Jack Spade is offering an extra 25% off even on sale items with the online code 25off until 1/17/11. That’s enough to make it very competitive price-wise with the brands above. We’re kind of torn between this and the also-on-sale soft waxwear folded messenger which is made of waxed canvas and is actually cheaper than the Fossil with both discounts. Wool: $175.88 Canvas: $133.88. 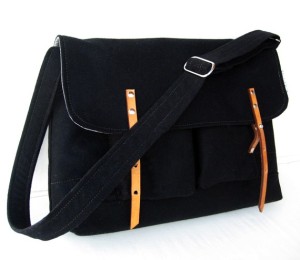 Finally, we come to our only option that’s not made in China. A Twitter follower turned us onto the shop of Etsy seller Sketchbook yesterday, and we’re suitably impressed. The design suits us both aesthetically and practically, and you’ve got to love anything that’s 100% natural. Nothing in here but wool, cotton, leather and steel. You’ve got to cut out a hell of a lot of middlemen to get something of that kind of quality for this price, but that’s the great thing about an Etsy find. We imagine there are few things more satisfying than having someone ask ‘Who made your bag?’ and answering ‘Amber Jensen from Minneapolis.’ Plus with a current availability of one item in each color, you can’t get much more exclusive. $140