It’s easy to get a little cynical about Station North sometimes. Even with all of the success stories in that neighborhood in recent years, it can be tempting to look around at all the still-crummy warehouse lofts, the custom bike shops, fashion-obsessed co-eds and sometimes obscure and inaccessible music scene and think “Welp, the City built the hipsters a nice little playground here.”

Indeed, it’s not difficult to forget about the higher end of culture in the neighborhood. There’s The Charles Theater, of course, and the everyman, and even the Meyerhoff and the Lyric between Mount Royal and North Avenues. And then there’s Station North’s other art school.

The Schuler School of Fine Arts hosts a retrospective of its late founder's works today. 2-6 pm.

The Schuler School of Fine Arts has been a fixture in Station North since before there was a Station North. Well before. Just look at the building. You don’t grow that much ivy overnight, and for more than 50 years the school on Lafayette Avenue has been a cloister dedicated to the study, admiration and emulation of the styles and techniques of the old masters.

At today’s exhibit (which also ran yesterday) you won’t be seeing any paint splatters or lines and shapes. No half-cocked political statements. No absurdist riffs on absurdity for the sake of irony. No silent, endlessly looping video installations. Dan Deacon’s not hosting any dance parties at Schuler.

The Chop has walked past the Schuler School hundreds of times. Possibly into the thousands. We’ve always sort of thought of it as that closed up little building where a few people go to paint so many flowers and fruit bowls and reclining nudes, and sculpt busts of old guys with beards. For years, that’s been the extent of our knowledge of the place. To us, the place has taken on the sort of mystery that a Masonic lodge or an Orthodox church can carry with it, and if you’ve felt the same way, we’d encourage you not to miss your chance to take a peek inside.

Time was when you could walk down any street in Fells Point on a Sunday afternoon and cross a group of kids with bags of records in hand walking around on nearly every block. The common parlance in those days wasn’t “Hello” or “How do you do?” It was Hail Satan. It was the Dark Lord Himself who provided free pizza in those days, as well as coffee and protection from alcoholic bums. 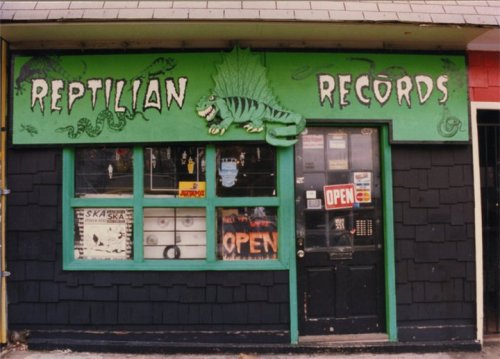 Reptilian still exists in some form. Much like Lucifer, it cannot ever truly die, but it’s powers have weakened severely in recent years. There’s a website, and even a facebook presence, and the label is still a somewhat active entity in conjunction with the Scapegoat Publishing imprint.

Sadly though, this is only a shadow of the demonic glory that was Reptilian in the Fells Point years. We remember when they sold not only records and CD’s, but also cassettes and VHS, not to mention comics, toys and t-shirts as well as hosting live shows and running the biggest and best label in the area.

We can only hope that tonight’s retrospective at the Windup Space will recapture some of the dark powers of the Salute to Satan events of old. Marking Reptilian’s 21st unholy anniversary, this one-night-only event could easily be the centerpiece exhibit in a museum of mid-atlantic punk. Just looking over some of the online photos we recognized a lot of friends looking young and dumb and up the punx, but thankfully no photos of the Chop in there.

Aside from pics at the store, there will also be photos and video from shows at some of Baltimore’s Dead Venues, as well as the premiere of the Upper Crust DVD, which was shot at the Ottobar so long ago that we’ve already forgot what year it was, and perhaps a few other surprises, Hail Satan.

If you grew up punk in Baltimore, you’re going to need to come by tonight for what will feel more like a family reunion than anything else. This is what holidays are all about, and tonight promises to be the blackest Black Friday yet.

Filed under Baltimore Events, Other