House Rules: 2 for 1 Happy Hour and the New Math

In many ways, there’s no better bar special out there than the two for one happy hour. Unless you’re going to feed us some free tasty food, getting twice the drink and half the check is pretty hard to beat.

Perhaps the greatest thing about it though, is the new math. When you buy a drink for a friend, sometimes the 2 for 1 actually pays the dividends of a 3 for 1. Bear with us here: what we’re about to say might not make much sense, or it might blow your mind. 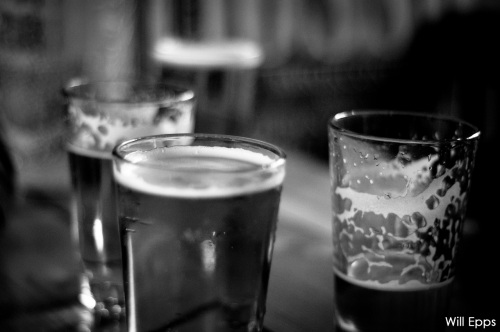 Have your beer, drink it too, and get another one into the bargain. The new happy hour math.

One of the recurring themes in our personal life this year has been the notion of trying to have your cake and eat it too. We’re convinced that with careful study and attention to detail that this is often possible, and that it’s one of the great keys to a life well lived. We’ve spent the better part of this year really concentrating on how to avoid making trade-offs in life, and so far it’s been working out pretty well for us.

A two for one happy hour is obviously one of the easiest ways to have your cake and eat it too. You can literally sip one drink while the other one sits on the bar. Giving it to your friend though, or anyone nearby, is a much better move. When you do this you’re actually buying 3 drinks: yours, your friend’s, and the one your friend will give you on the next round.

Granted, he’s technically purchasing that last one, but he is obligated. During a non-happy hour, the obligation might still be there, but it wouldn’t be quite so strong. There are plenty of situations in which you can accept a drink with polite thanks and not be on the hook to respond in kind, but during happy hour, when they’re pouring them two at a time, there’s no excuse for not giving back that second drink.

For just the price of a single drink, you’ve received your first drink, bought your friend a drink, and put him on the hook for your next round. That’s three drinks. It’s even better than having your cake and eating it too, and it works both ways. Your buddy is also getting three for one, after a fashion. It’s something to keep in mind the next time you’re in one of our favorite bars with a two for one happy hour, like George’s or the CVP.

Tagged as 2 for 1 drinks, 3 for 1, Baltimore, bar culture, Bars, best of both worlds, Charles Village Pub, CVP, Drinking, George's of Mount Vernon, Happy Hour, have your cake and eat it too, Maryland, new math, specials, tradeoffs